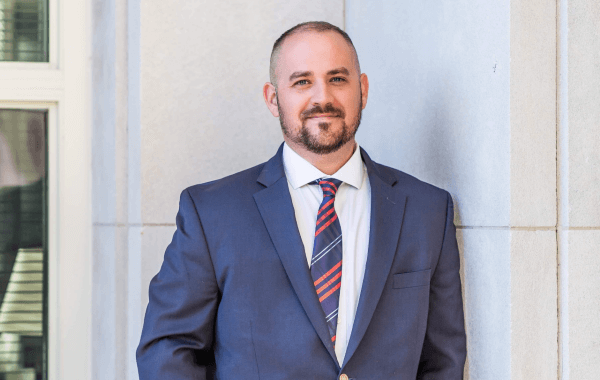 When Chris was younger, he would tell his Mom and Dad, "I want to be President of the United States". They would always then ask "why?" and his answer was always the same -- "because I want to make a difference." As he grew older the how may have changed several times, but the why never did. Chris always knew he was going to make an impact on others, and their lives. He now knows how he is going to be that difference for others. He advocates with strength and commitment in the law for his clients. That is what public service means to him. He feels privileged to help guide his clients to an answer and sometimes be the answer for his clients and their family. To Chris, the strength of public service is helping make the tough decisions that support individuals.

During his college years at Radford University, he saw a need among his fellow students. He opened a business to help fill that need, and with that, he opened his first restaurant. He was successful at this business and felt accomplished that he created an option that became popular and helped other students. He continued down this path until he realized he had gotten away from what stirred him, his flame to help serve others. He told his wife that he wanted to get back to that part of him and said was going to the police academy. Chris's wife supported his decision and he signed up for the police academy not knowing what kind of roller-coaster he was joining.

After nearly seven years of service and countless stories he could tell, just not in 500 words or less, that law enforcement was not where his journey was to end. During his first several years as a policeman, he participated in numerous community events. He helped with food drives, organized youth athletics, spoke at community meetings, and much more. During his last two years in law enforcement, he was a detective and saw a deeper need and hurt within the community. This vision came about, in part, because he was now dealing directly with both victims and those charged with a crime. These interactions provided him with the knowledge that in troubled times individuals just needed assurance, guidance, and sometimes just a good listener. He saw the resolution that the court system offered and more than ever he wanted to be part of that resolution. Chris believes that he can offer something unique and inspiring to the field of law when given the opportunity. A new kind of lawyer for a changing world.

His hobbies include spending time with his wife Sarah and two children, riding motorcycles, watching the Washington Capitals play hockey, working out, listening to books/podcasts, grilling and cooking outside, snowboarding, traveling, playing the drums, and attending Temple Baptist Church throughout the week.